Yesterday was the day that we showed our hard work off to the public.

Today we want to share the pictures with you!

Please sit back and enjoy, the Blue Bolt 2.0 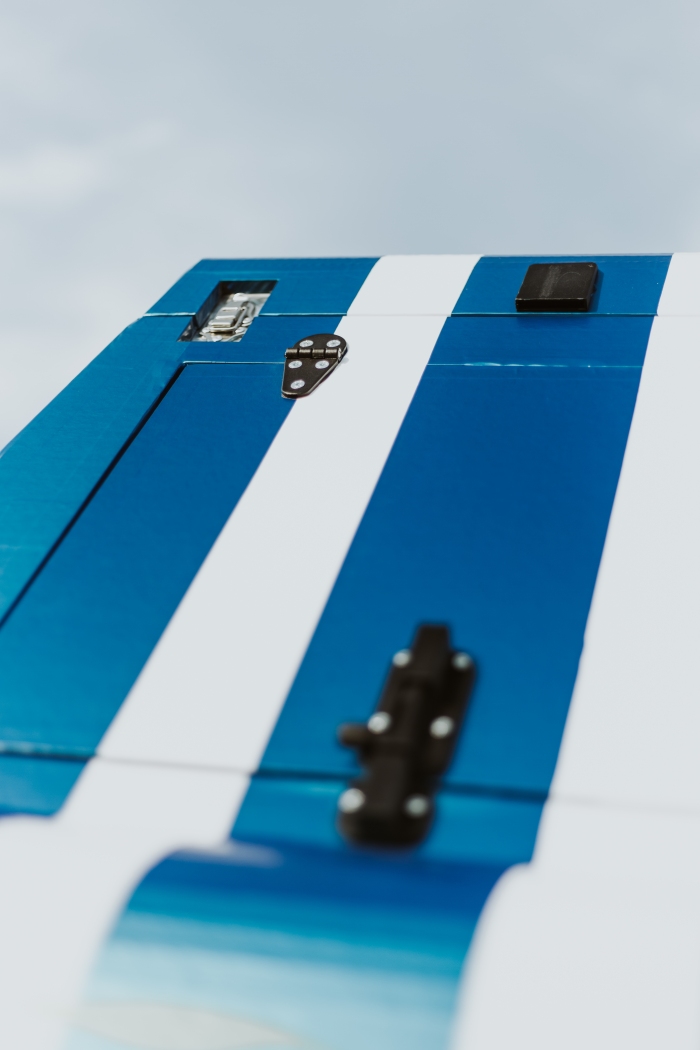 We also had some media attention. The articles are in Dutch and can be found here and here.

This Monday we had the first test drives for the Blue Bolt 2.0 at Kartcircuit Pottendijk in Nieuw Weerdinge.

We had the circuit al to ourselves to do some tests. We are very happy with results thusfar. Ofcourse we ran in to some issues but we are working hard to solving these problems.

Because our release is on Wednesday 23rd of May we cannot show any footage of the car. But we can show you these pictures:

We also received this years team clothing with all of our sponsor.

Please stay tuned for the release of the Blue Bolt 2.0 next week!

Past semester there have been a lot of developments within the Blue Racing Team. With the start of the new schoolyear (2017-2018) there is a start of a new team.

The decision was made to start all over again this year, this means a totally new car in the category Urban Concept Battery Electric is designed.

During the first semester a design has been made for the new car in which controversial aspects have been included. The first part production started in February. Of this we would like to share a few pictures.

Shortly the new frame will arrive, after which we can start to construct and assemble the car.

All in all, there is still enough activity around the Blue Racing Team of UAS Windesheim.

It has been a little over a week since we are back from the Shell Eco marathon in London. Most team members are back to normal life and started finalizing their projects and other courses for their study. All the memories from the event have mostly settled in and every can look back on an amazing week.

On the 21th of May we left towards London, a small delegation of the team took off with our car and the tent for the campsite.  Upon arrival 12am this group even decided to be very productive and put up the big tent including our party tents.

On Monday the team prepared the paddock and moved all equipment from the van to the desired location. This took up most off the day and the team decided that heading home, back to the campsite, on time would be good. So we went back to the campsite and enjoy a perfect self-made spaghetti. I can tell you, it was really good after a long day of work.

Whenever I think about England and London in specific, I imagen an busy city with lots of traffic and rain almost all year around. Well must have been very fortunate because we have had the warmest days in London they had seen in a long time. 30 degrees, not really ideal conditions for the race and the preparations. But well you can’t really change anything about, can we?

On the following days it remain pretty warm as we prepared for the technical inspection. Technical inspection, probably the longest queue I have seen in a long time. Every hour of the day you could find at least 20 or 30 teams in line to get their vehicle check and approved for the race. We started the technical inspection on Wednesday morning and were half way through in the evening, so that meant coming back to the inspection first thing in the morning and making sure the we would be ready for the race. Unfortunately there were still some features that needed improving on Thursday and therefore we had to way till Friday morning for the final word.

On the Thursday the weather started to change a bit, it got a bit colder and the wind started to be really noticeable. It even got so bad that our camp and up like this:

After some damage control we recovered most of the basecamp, but it never got back as it was before..

On the Friday, first day of the race, we went through the final stage of technical inspection and got approved for the race!! The team was really happy and glad that they passed the inspection and started speculating about what might happen.. Friday afternoon, we had our first attempt and were greatly disappointed in the result. Our vehicle was not performing up to the standards and was not likely to perform well on the next day. At the end of the day, half of the team members went back to the campsite and started preparing dinner while the other half started figuring out what the problem was. Luckily, they found most off the problems and were positive on the attempt on Saturday.

On Saturday morning it started raining really badly and we decided to delay our start by 15 minutes to be sure that we wouldn’t fry our electrical components. When we finale started we had a good attempt but due to reckless behavior of another driver we had some technical difficulty.  We were heading for a great time and got as close as 9.5 of the 10 laps. But sadly weren’t able to finish this attempt. The team worked really hard for another attempt late on Saturday, but the trend of the morning continued in the afternoon and this attempt was not a success either.

Overall we have had a great week, we learned a lot about our car and the challenges we will have to face for next year. Most of the team member will move on to a new project and start working on that. But there are 6 members of the team that decided this race and this challenge for durability isn’t over yet!

Finally, I would like to thank everyone who was involved in this amazing project and hope they are ready for another year, because LONDON 2018 HERE we come!!

Wednesday 17 may 2017 the students of the Blue Racing Team tested their car for the last time before they head out to London! The electrical system, gas and brake mechanism worked excellent. We still found some room for improvement and we are working on it right away, so hopefully everything works perfect in London. We are very exited to go to London! 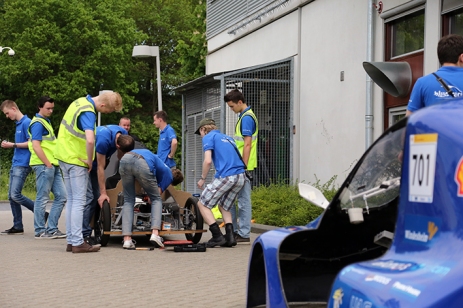 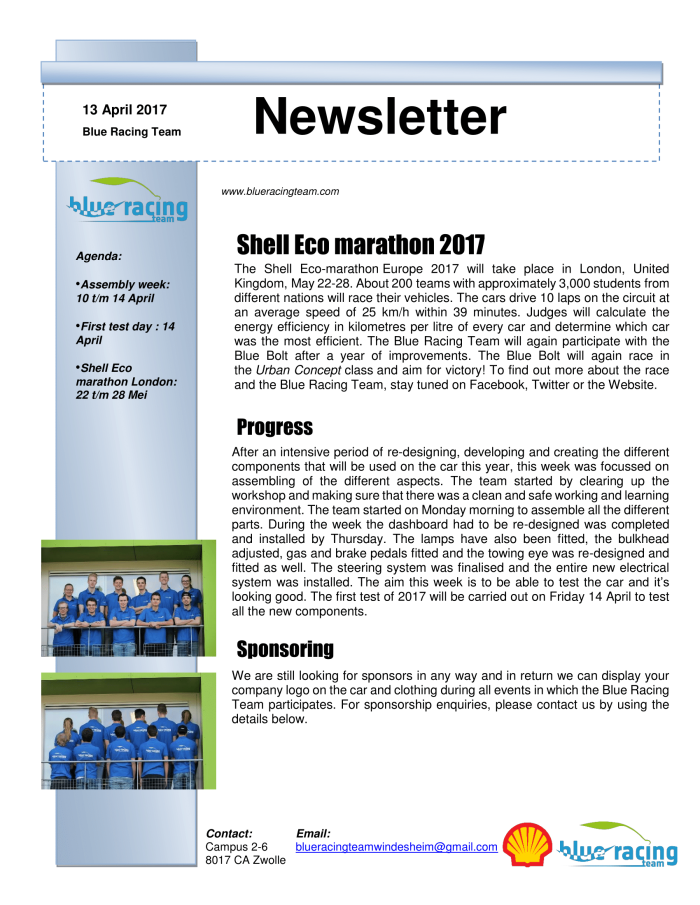 We have a reason to celebrate: 608 kilometers per liter!!

Blue Bolt has just put down a qualifying result of 534 kilometers per liter! One more round to go, in which we will do everything to surpass the result!